These days it’s not rare to be swiping on one of China’s tinder-like dating apps and come across a user, male or female, whose bio says “wanna eat chicken?” (吃鸡吗). This is a reference to one of the most popular online games in China, PlayerUnknown’s Battlegrounds (绝地求生), owned by the South Korean video game company Bluehole. The game is very similar to Fortnite; a character is airdropped into a gunfight and the words “WINNER! WINNER! CHICKEN DINNER!” come up when the player survives a round – hence all the talk of chicken. This invitation to join a stranger in gaming is just one insight into how prevalent online gaming and e-sports (semi-/professional gaming) are in contemporary China.

Enough about chicken, on to the luxury. In 2019 Louis Vuitton made the trophy case for the League of Legends (LoL) world championship. As the world’s largest online multiplayer battle game, the LoL world championships are the crème de la crème of e-sports. While some may be surprised by LV’s foray into bespoke items for elite gamers, in some ways it makes a lot of sense that they spent 900 hours crafting a trophy case. It’s increasingly common for luxury brands to announce rather unexpected collaborations, think LV and Supreme, or Ralph Lauren and Palace. They need to plant their brands in the psyche of future consumers. However, as a generation of gamers and young people who have only known the digital world grow up, will their own entrepreneurial endeavours prove a challenge for luxury brands?

Yan Junze (known as “Letme”) is one of China’s most popular gamers. He was in the Chinese national LoL team that won gold in the e-sports section of the 2018 Jakarta Asian Games and has over 1.5m followers on Weibo. In 2019 Letme retired from gaming and has launched his own fashion brand. Launched in September and already with over 100K followers on Weibo, R39 claims to be “the first Chinese people’s major e-sports brand”. First released on YOHO in the autumn, R39 launched its Tmall store on 12/12 (a Chinese consumer festival), displaying a range of street-inspired, comfortable looking t-shirts, hoodies, and two-piece outfits.

R39’s position in the market potentially gives it a unique advantage for three main reasons. To start with, it’s the first brand of its kind; R39 likes to claim this fact itself, as mentioned above. Second, 58% of China’s almost 500 million gamers are women; R39 certainly isn’t marketing to a boys-only club and East Asian pop culture favours androgynous looks more than Western cultures, allowing a smaller range of designs to have wider appeal. Third, it’s Chinese; consumers are proud of their country’s changing status in the world and while they do not want to buy exclusively Chinese, if a domestic brand is genuinely cool, they’re going to support it. Chinese sports brands such as Li Ning and Hi Panda are already testament to this. 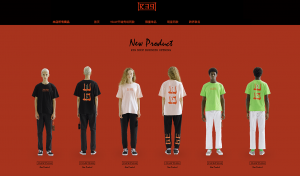 It’s still unclear in what direction R39 plans to develop. Their coats cost around 700RMB (£76) and other apparel is only 100-200RMB cheaper. That’s not too expensive to the average Western consumer and such price tags are the norm in China’s major cities. However, to the bulk of Chinese gamers who only earn 3000-8000 RMB (£330-£870) per month, it’s a considerable chunk of their income. Product manager Hu Zhengyuan told Business of Fashion China (in Chinese) that the brand hopes to tap into a wider audience of lovers of Chinese street culture, while their prices potentially reflect the future spending habits of gamers. Given that 60% of Chinese gamers are currently under 30, he has a point.

While R39 has financial backing from Letme’s gaming team’s business and support from big figures in Chinese e-sports, BoF China points out that R39’s next challenge is to really work on design and quality, especially as new competition emerges. R39 cannot be considered luxury for now but it certainly has the potential to bite into the market share of some luxury brands, especially luxury streetwear. If it does work on its craftmanship, then it may only prove more of a challenge to other brands.

Whether R39 proves to be a success story or not, Letme’s entrepreneurial endeavours are certainly a harbinger of changes to come. Like professional athletes, e-sports stars can’t stay at the top of their game forever and need to build careers for after they retire from the field… or gaming chair. It’s more than normal for a footballer or hip-hop star to become an entrepreneur later in life, so what’s to say that Chinese (or any) gaming stars won’t do the same and establish new, exciting brands in their numbers? Luxury brands have nothing to fear overnight and there is room for exciting collaborations in the near future. However, they would do well to keep an eye out for brands that grow out of a tech-savvy generation, digital cultures, and tap into national sentiments – especially in the case of China.