The recent launch in Shanghai of London skate and streetwear brand Palace brings the shifts streetwear has made to the fashion industry and the direction in which it is riding into the future. One thing is for sure, luxury streetwear represents a desire for flexibility among millennials and younger generations inside and outside of China, as well as a means of showcasing personal values.

Palace held a pop-up store at Arkham (a local underground music club, which is literally underground) over three days this November. Not launching in China with products on a highly commercialised e-commerce platform resonated well with Palace’s loyal Chinese followers. The merchandise on offer was exclusively street too, a lot of the products were from Palace’s recent collaboration with Adidas and Juventus FC. Founder Lev Tanju ruled out any possibility of setting up a fixed store in Shanghai any time soon. Palace do have an official Tmall store but its front page currently says “coming back soon”.

Palace is often thrown into the same box as Supreme, another skate brand with well-earned street credentials. The two of them have been known to break the internet with controversial but hugely popular collaborations with luxury brands. Palace and Polo Ralph Lauren teamed up to release a range of formal slippers in 2018, while Supreme partnered with Louis Vuitton in 2017, a year that saw LVMH report a 21% year-on-year increase in revenue for fashion and leather goods. 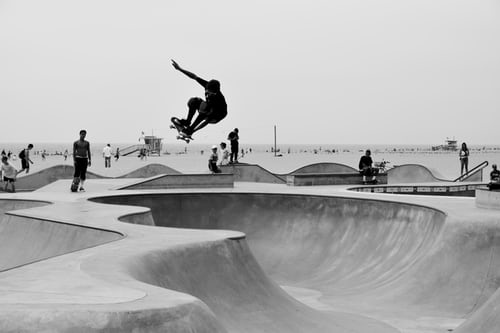 What do these partnerships tell us about the changing attitudes of more conventional luxury fashion brands and equally the changing consumers, notably in China? Luxury fashion brands can no longer assume Chinese customers will blindly rush to the highest price tag as a means of social distinction. Meanwhile, as Chinese millennials and Gen Z-ers diversify their lifestyles and self-styling, conventional luxury labels will lose out unless they diversify their own image.

Highsnobiety’s 2018 white paper listed the top ten brands mentioned by their users regarding purchases of $500 or more. Balenciaga topped the list, which also included Nike, LV, Off-White, Stone Island, and Yeezy. The hunger for luxury streetwear among millennials and Gen-zers is clear, and not just in the West. As well as international big-hitters, domestic streetwear brands are taking China by storm. Known as guochao pinpai 国潮品脾 (domestic “wave” of brands), brands such as Li Ning and Hi Panda allow young Chinese consumers to assert a home-grown experimental image. 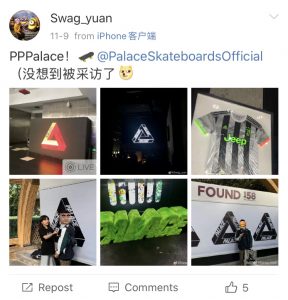 Source: Weibo, “I didn’t expect to be interviewed!”

This mixing and matching of labels and styles highlights how young Chinese wish to adapt their look day by day. They want to express how they are feeling and display the different lifestyles they manage to juggle. Highsnobiety’s paper found similar views among their readers: only 6% claimed that they purchased luxury products as a “direct expression of wealth”, while “85% believe that what their clothes represent is just as important as their quality or design”.

Jade Tomlin from business consultancy Tribal Worldwide London has noted how digital-savvy millennials want to “make a statement that’s conscious, unique, and not-least, social media worthy”. If luxury designers want to keep ahead of the game, they can’t just think about how they can consolidate their own brand alone. They have to consider how their customers each wear and carry their apparel; what that does for each consumer’s own personal brand; and what set of values their customers want to broadcast.